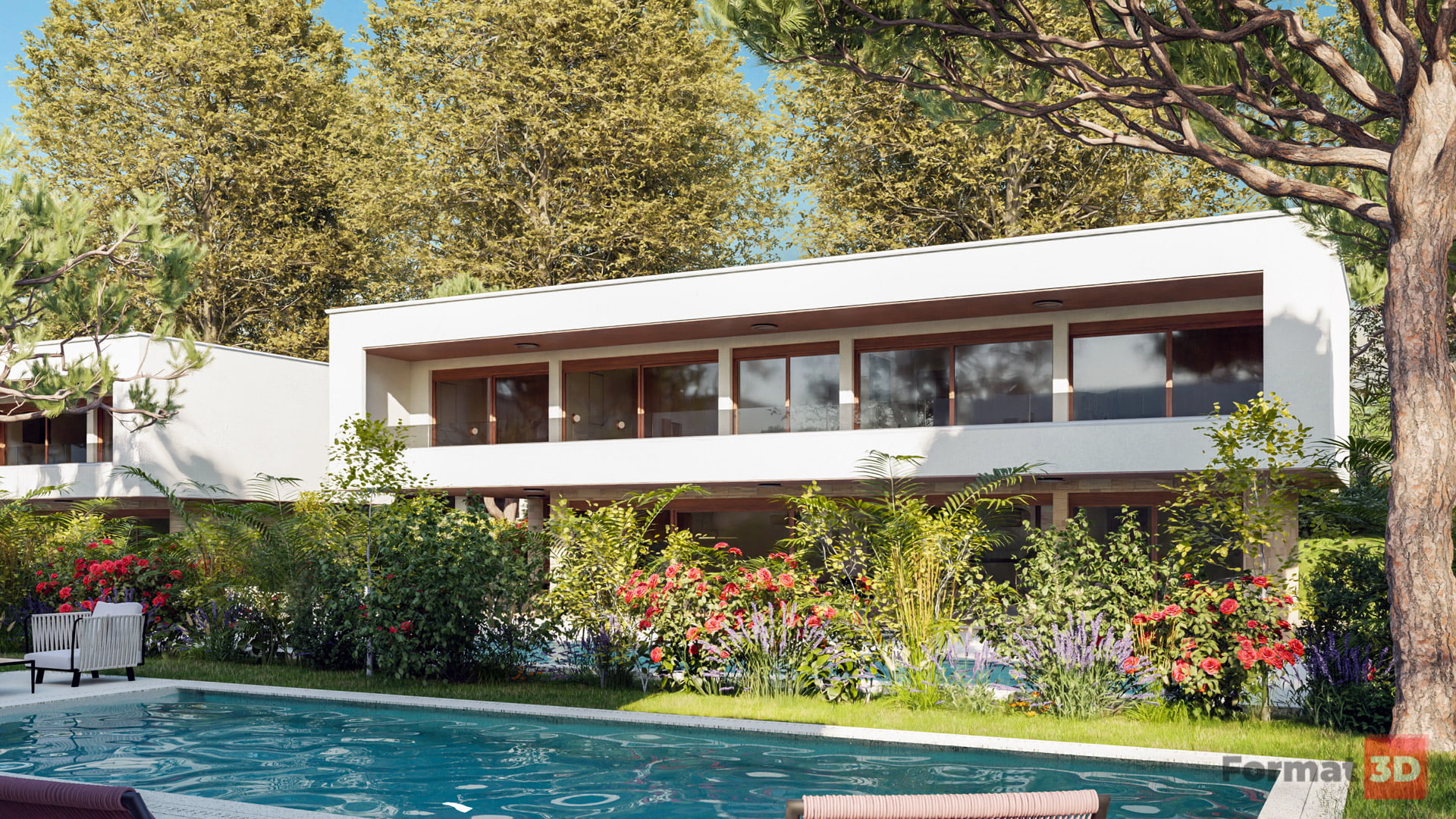 In the next case study, we describe the process of creating 3D visualizations of the tourist complex in the settlements of Sveti Filip i Jakov not far from Zadar. The project consisted of 19 detached luxury villas, 6 semi-detached houses, hotels and 6 hotel annexes with a total built-up area of 16,109 m2. The project was commissioned by Bluesun Hotels and is signed by the Architectural Studio Madunić. The designer provided us with DWG drawings, PDF documents and a simple SketchUp model, which served as an auxiliary working model that allowed us to solve many doubts during modeling.

The project included the creation of 3D visualizations of the exterior and interior, the interpolation of 3D models of the complex in photos taken by a drone from different angles (photomontage), and the animation of the entire settlement for about 2 minutes. Twinmotion was chosen to perform the animation, which was the most economical and fastest solution, and Blender was used to animate the interiors. After reviewing the submitted materials in detail and compiling the offer, we estimated that the complete project would take 7 weeks.

For the successful implementation of all our projects, a form of communication was agreed with the client that suited him best and consisted of weekly reports and a joint WhatsApp group. Weekly reports informed the client about the status of the project and described in detail everything that was done that week, what was planned for the next week, our suggestions for improving the project, but also a list of tasks for the client (requirements for materials, colors, textures, horticultural styles, angles, etc.).
The WhatsApp group was set up for the purpose of making quick decisions about the project and possible fixes, which greatly expedited certain processes where we needed a quick response from the client. Our WhatsApp group included the architect, our project manager and our team leader.

For the needs of the project, photogrammetry of the site (3D mapping) was performed, which gave us the configuration of the site, which helped us a lot in positioning the facilities, especially the hotel building in the area of the garage entrance.

While recording the bases for photomontage and materials for photogrammetry, a drone HDRI map of the entire area was created, which gave us a very natural atmosphere in the final renderings.

Below we will talk about the details of the project in its different phases.

After working out the project task in detail and receiving all the necessary drawings and bases from the designer, we started creating 3D models of the buildings by dividing the whole project into different types. So, we started modeling each type of building located in the tourist complex. We have already mentioned that in the last projects we used Blender for 3D visualizations because it offers many features, is fluid, allows UV mapping, can be exported to many different formats, but also offers the possibility to render via GPU, which speeds up the rendering process by five times.

Each building type of the complex is modeled

Due to good and fast communication with the designer, the accuracy of the model was checked.

After the models were confirmed, we started texturing the objects. Working with the architect, we selected textures that were authentic to the local environment and best suited to the project itself.

The textures were added for each object

In our visualizations, we place great emphasis on using the highest quality lighting possible. Therefore, for the needs of the project, we use either our own HDRI maps taken directly at the site of the future project, or the most similar ones from our extensive database. We present these simple renderings to the client, who gives us the green light to proceed with the project. At this stage, changes to the project are possible if the designer decides to make a change.

We split the hotel building into a separate segment, so we started modeling and detailing after we finished modeling and texturing of other buildings. As part of the modeling of the hotel, we added the vegetation that surrounds the hotel.

Model of a hotel with vegetation nearby

Texturing and lighting of the render review of the hotel

We did the texturing of the hotel in consultation with the designer. After several different variations, we decided on the one that best fit the rest of the resort.

Adding textures to the hotel

Adjusting the brightness in the rendering of the hotel

In our projects we pay great attention to the terrain and its precision. Terrain has an extremely large impact on most projects (except for those that are completely apartment, which is a great rarity). Therefore, we very often use photogrammetry in our work to obtain a precise terrain configuration. Through this process we obtain a point cloud from which we derive a terrain model. In the following examples you have the opportunity to see how the terrain modeling looks like, the placement of previously modeled and textured buildings and hotels in the field.

Modeling the terrain of the entire resort with roads and paths

Placement of previously modeled and textured objects on new terrain

Placement of previously modeled and textured hotel on new terrain

In this part of modeling we add to the scene green walls between buildings, detailed vegetation, car shelters and outdoor furniture on the terraces of hotels and other buildings.

Placing vegetation in the field

Based on our proposal for a Mediterranean style interior and a detailed consultation with the designer, we have chosen furniture models from our database, which includes more than 35,000 different models. The kitchens are our own work and we have specially adapted them to fit into the space with their design but also with their function.

In terms of colors, textures and materials, we have chosen neutral tones that ideally match the chosen Mediterranean style of interior.

We arranged the furniture in SketchUp, whose model we later imported into Blender.

Preparation of interior and terrace models in SketchUp

Preparation of the materials for the interior

Import of the furniture models into the interiors

We matched 3D models and photos taken from the air by a drone using fSpy software. fSpy is a great open source add-on for Blender that helps interpolate 3D models within the photo scene. It is a process that estimates camera parameters from specific data within an image. fSpy successfully calculates the approximate focal length, orientation, and position of the camera in relation to the assigned control points.

At the site in Sveti Filip i Jakov, we used drones (DJI Phantom 4 Pro and DJI Air 2s) to take a whole series of aerial photos of the site. We took photos in 5 exposures each (in RAW of course ) and thus later created great HDR photos of the place, the surroundings and the view using Lightroom.

On the same day, we sent the client to the location to choose from more than 50 edited photos of the place taken from different angles.

For the photo montage, 8 photos were selected that best showed the location of the project. Then we started post-processing and adjusting the vegetation by adjusting the previously rendered models to the actual position in the space.

“Matching” photos taken with a drone and a finished model using fSpy software.

We often point out that post-production is a large and sometimes crucial factor in the creation of 3D visualizations. For example, in this project, numerous corrections were made to the scenes through editing in Photoshop. In particular, we would like to highlight the addition of realistic sky backgrounds, the occasional insertion of people within the scene, the correction of colors, lighting, etc.
You can see part of this process in the following examples.

The beginning of creating 3D animation is not in 3D modeling programs, but in pencil and paper.
Actually, it all starts with creating a script based on the message we want to convey. In this project, it was important to show the entire settlement and the hotel’s relationship with it. Through animation, we tried to show all the contents of the objects as well as their function.
Twinmotion for the exterior shots and Blender for the interior shots helped us prepare the clips for 3D animation. We mostly use Twinmotion for projects where the goal is to create simple animations that the client needs relatively quickly, and for projects where further changes are possible. Of course, the choice of 3D animation technology is also influenced by the budget that the client has for the animation.

And finally came the editing of the animation, which we did in Final Cut Pro video editing software. The music selected is royalty-free background music.

Do you have a project that you would like to talk about? Wondering which 3D visualization will work best for you? Do you have a question for us about how we work? Leave us a message here – and we will contact you!

The Best 3D Rendering Software of 2022

Check out our list of the best 3D rendering software tools for animation, special effects, and architectural visualization. Some are free. 3D rendering is the final stage of the 3D animatio...

Sign up for our Referral Partner Program and get rewarded

Format 3D Referral Program allows you to leverage your sales and entrepreneurial skills to create a new long-term revenue stream for yourself. Over the past 17 years, Format 3D has provided...

In the next case study, we describe the process of creating 3D visualizations of the tourist complex in the settlements of Sveti Filip i Jakov not far from Zadar. The project consisted of 19 d...

In this case study we present the process of creating a 3D visualization for one of the most exclusive projects on the Adriatic. It is the Dolabella Heights project, which includes 7 luxury vi...

We Are Hiring: Regional Business Developers

Format 3D is going even further, planning a new round of investment in expansion. After expanding to the German market, we plan to position ourselves in other countries as well, for which we a...

Format 3D has been developing its international position for some time by collaborating with numerous international architectural offices, investors, construction companies and interior design...

The City Island project is a large scale project that currently consists of 6 office buildings and one garage building. It is about 300,000 m2 of office space located area of more than 80,000 ...

What is 3D exterior rendering?

Exterior rendering is the process of creating three-dimensional visuals showing the exterior design of architectural projects to be built. It is done by 3D artists using computer software. Ext...

You can find out more about which cookies we are using or switch them off in settings.

This website uses cookies so that we can provide you with the best user experience possible. Cookie information is stored in your browser and performs functions such as recognising you when you return to our website and helping our team to understand which sections of the website you find most interesting and useful.

Strictly Necessary Cookie should be enabled at all times so that we can save your preferences for cookie settings.

If you disable this cookie, we will not be able to save your preferences. This means that every time you visit this website you will need to enable or disable cookies again.